Hi,
You may have seen Boston Dynamic Dogs and the recently released Sony Aibo. They are supper cool but are too expensive to enjoy. I hope to provide some affordable alternatives that have most of their motion capabilities.
With very limited resources and knowledge, I started small. Smaller structure avoids a lot engineering problems of those larger models. It also allows faster iterations and optimization, just like rats adapt faster than elephants. Regardless the hardware, the major control algorithm could be shared once accurate mapping of DoFs is achieved. I derived a motion algorithm (with a dozen of parameters) for multiple gaits. The current fastest speed is achieved with trotting(2-leg-in-air). As I constantly add new components and change the CoM, while the adaptive part is not good enough, I reserve the tuning time for finalized models. 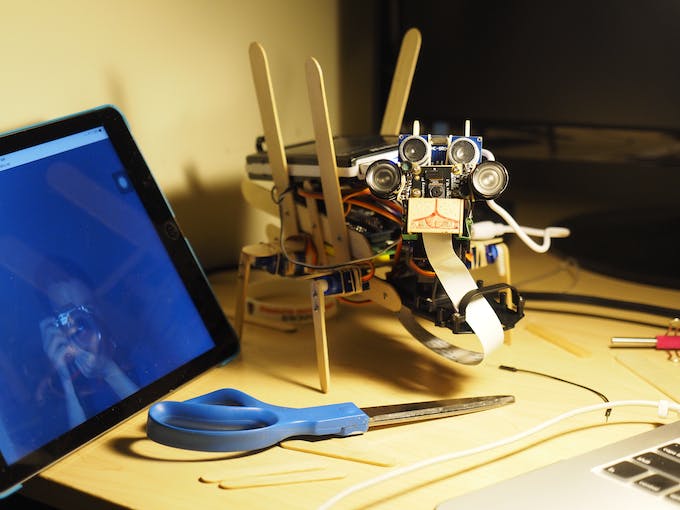 The motion algorithm is currently implemented on a 32KB,16MHz Arduino board, using up its system resources with algorithmic optimization almost everywhere. I'm going to switch to a 256KB,48MHz board to boost the performance of active adaption, as well as allowing additional codes by future users. The motion is actuated by hobby level (but still robust, digital & metal gear) servos considering price. Some elastic structures were introduced to damper the shock and protect the hardware.
On top of the motion module is a RasPi. The Pi takes no responsibility for controlling detailed limb movements. It focuses on more serious questions, such as "Who am I? Where do I come From? Where am I going?" It generates mind and sends string commands to the Arduino slave. New motion skills can also be sent to the Arduino in a slower manner. A human remote sits in the middle to intercept the robot's control of its own body. It will still hold certain instincts, like refusing to jump down a cliff.
Currently I have two functional prototypes: 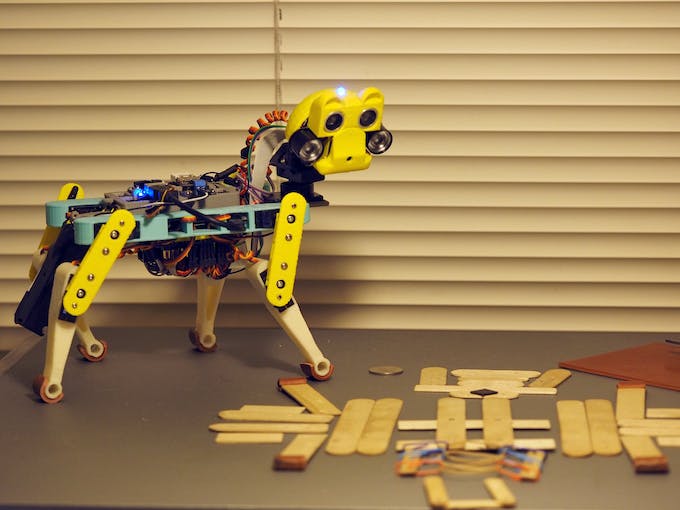 The mini model is a stand-alone 8-DoF Arduino motion module that holds all skills for multiple gaits and real-time adaptation. It can also be a "leg-hat" for your existing project. It's targeted at STEM education and Maker community. The price will be similar to some robotic car kits.

The full version uses a Pi for more AI-enhanced perception and instructs an upgraded 16-DoF motion module. Besides Pi's wifi and bluetooth, it also carries ground contact, touch, infrared, distance, voice and night vision interfaces. All modules have been tested on its light weighted body. It also adopts some bionic skeleton designs to make it morphologically resembles a cat. It's targeted at consumer market with less tech backgrounds. You can imagine it as a legged Android phone or Alexa that has an app store for third party extensions. I have a regular routine for duplicating the model, but need better industrialization to reduce the labor. I expect the price to be close to a smartphone. 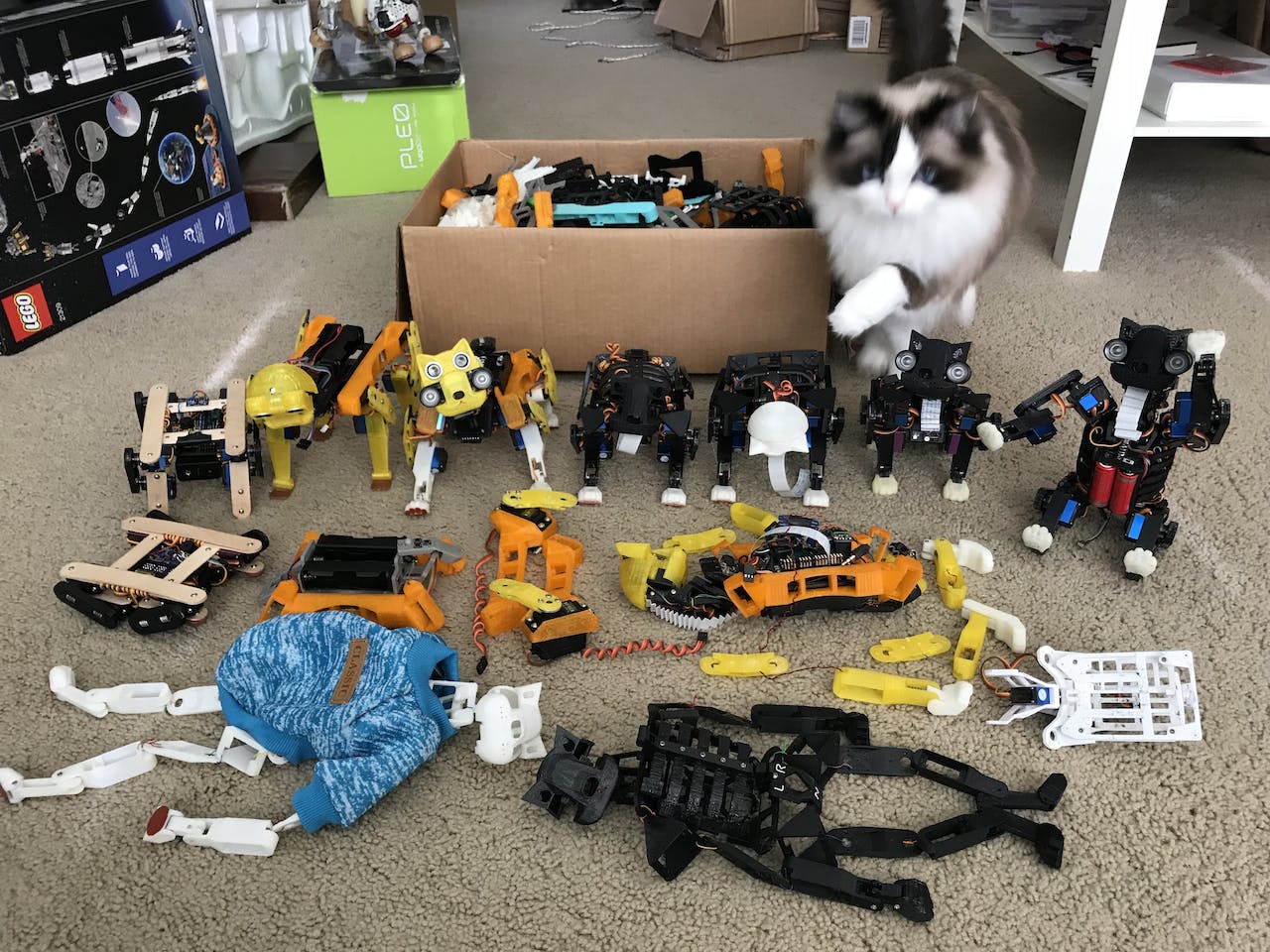 I also have an obsolete version that uses only Pi for controlling both AI and motion. All code were written in Python. The movement is not as good if it's running intensive AI tasks.
I bought my first RasPi in Jun.2016 to learn coding hardware. This robot served as a playground for learning all the components in a regular RasPi beginner kit. I started from craft sticks, then switched to 3D printed frames for optimized performance and morphology. An Arduino was introduced in Jul.2017 for better movement. The 7 major iterations were made between Jul.2016 and Sep.2017. No significant progress was made since last September, when I got distracted from increasing job duties, company formation and patent writting.


I'm now teaching a university robotics class using the Mini kit. I hope to sell more kits to validate the market and bring in some revenue to keep the project going. The full version is yet to be polished. I'm also applying for several accelerators and will probably try Indiegogo. Depending on where the best support I could get, I may start a business or make the project completely open-souce. 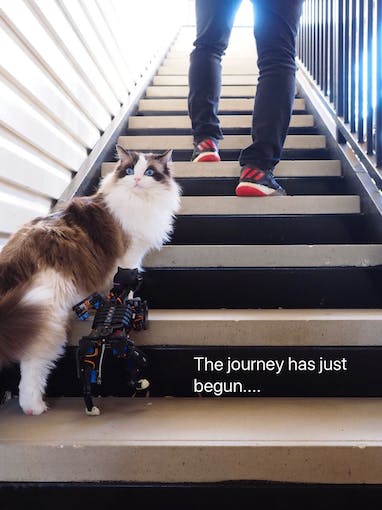 I'm not saying I can reproduce the precise motions of those robotics giants. I'm just breaking down the barrier from million dollars to hundreds. I don't expect to send it to battlefield or other challenging realities. I just want to fit this naughty buddy in a clean, smart, yet too quiet house.
Currently it can continuously run at about 2.6 bodyLength/sec for 60 mins, or sit streaming videos for several hours. Users can focus on coding it on either motion (Arduino with C) or AI (Pi with Python) part. And the two can communicate through string tokens. It's pretty easy to teach new postures and behaviors with a couple lines of codes. I believe in the power of open-source if everyone could grab a robot and start to solder and code. Students can learn physics and coding on a new type of toy. Robotics experts can experiment with their own walking algorithms on a much cheaper platform. Software developers can write AI-enhanced applications on a pet-like robot, rather than a "wheeled ipad". 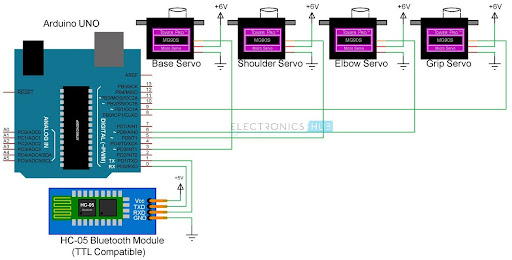