It's what you've been waiting for, the Feather M4 Express featuring ATSAMD51. This Feather is fast like a swift, smart like an owl, strong like a ox-bird (it's half ox, half bird, OK?) This feather is powered by our new favorite chip, the ATSAMD51J19 -  with its 120MHz Cortex M4 with floating point support and 512KB Flash and 192KB RAM. Your code will zig and zag and zoom, and with a bunch of extra peripherals for support, this will for sure be your favorite new chipset. 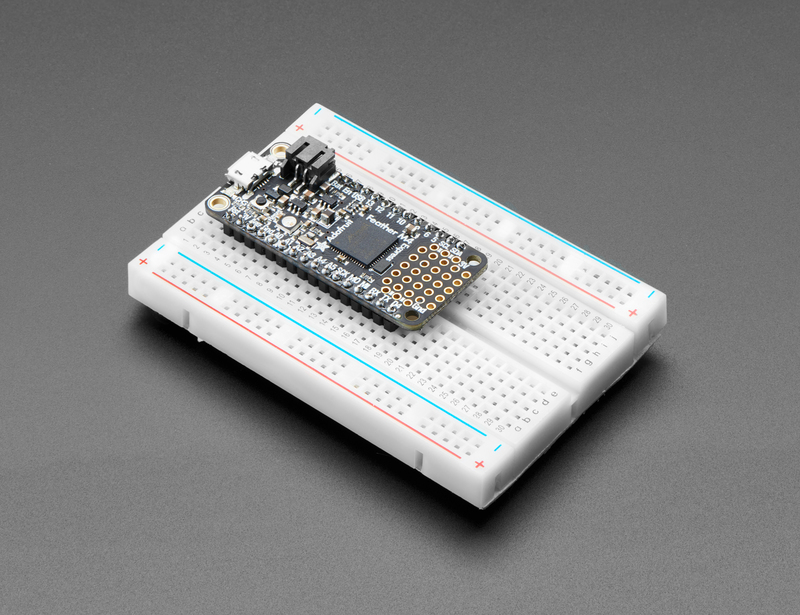 And best of all, it's a Feather - so you know it will work with all our FeatherWings! What a great way to quickly get up and running.
The most exciting part of the Feather M4 is that while you can use it with the Arduino IDE - and it's bonkers fast when you do, we are shipping it with CircuitPython on board. When you plug it in, it will show up as a very small disk drive with main.py on it. Edit main.py with your favorite text editor to build your project using Python, the most popular programming language. No installs, IDE or compiler needed, so you can use it on any computer, even ChromeBooks or computers you can't install software on. When you're done, unplug the Feather and your code will go with you. 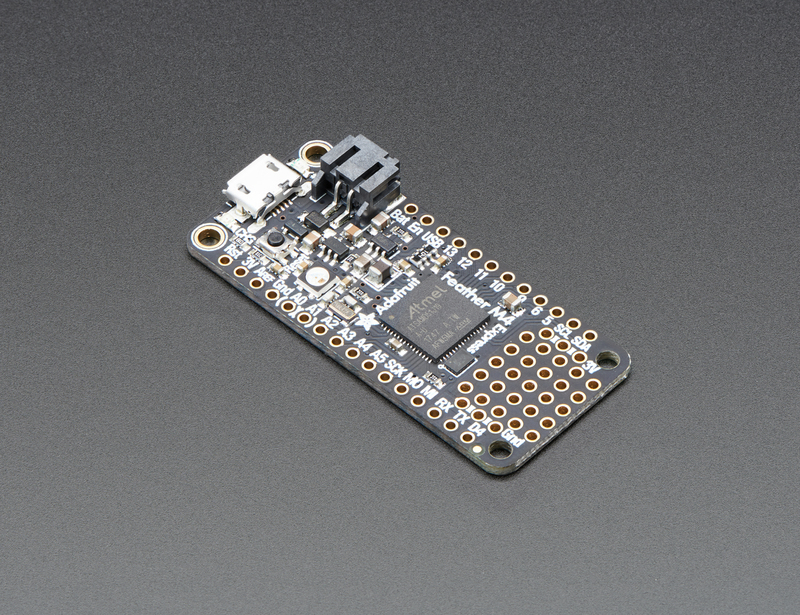 Here are some of the updates you can look forward to when using Feather M4: 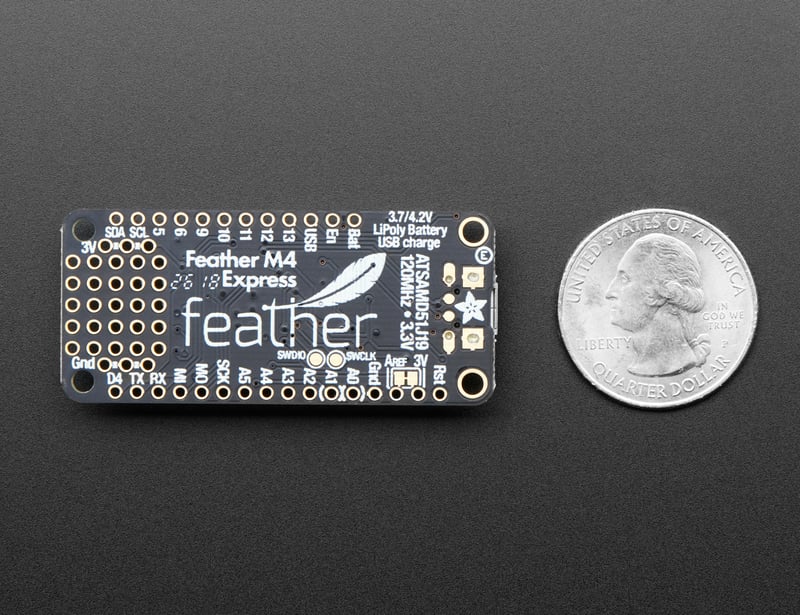 The Feather M4 Express uses the extra space left over to add a Mini NeoPixel, 2 MB SPI Flash storage and a little prototyping space. You can use the SPI Flash storage like a very tiny hard drive. When used in CircuitPython, the 2 MB flash acts as storage for all your scripts, libraries and files. When used in Arduino, you can read/write files to it, like a little datalogger or SD card, and then with our helper program, access the files over USB.
Easy reprogramming: the Feather M4 comes pre-loaded with the UF2 bootloader, which looks like a USB storage key. Simply drag firmware on to program, no special tools or drivers needed! It can be used to load up CircuitPython or Arduino IDE (it is bossa-compatible)
Comes fully assembled and tested, with the UF2 USB bootloader. We also toss in some headers so you can solder it in and plug into a solderless breadboard. 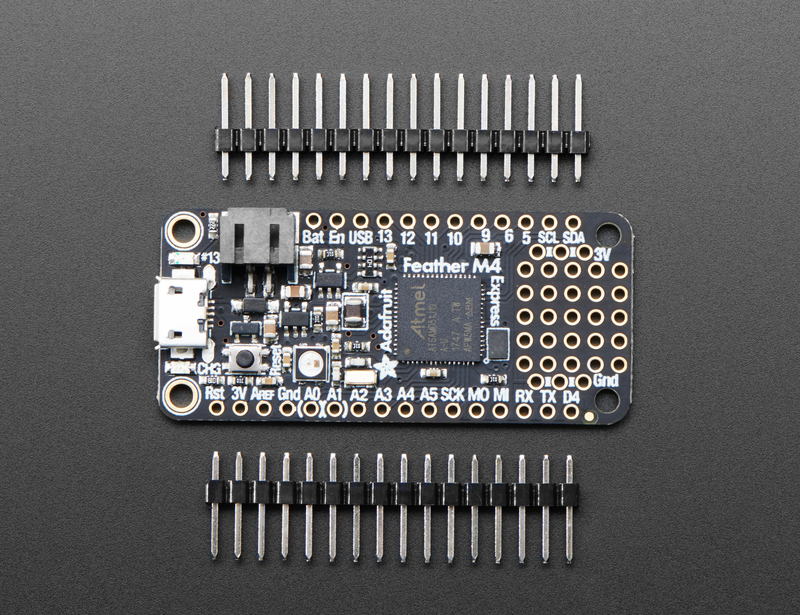 The Feather M4 is chock-full of microcontroller goodness. There's also a lot of pins and ports. We'll take you a tour of them now!

This is the general purpose I/O pin set for the microcontroller.
All logic is 3.3V
Nearly all pins can do PWM output
All pins can be interrupt inputs
Analog Pins:
These pins are available in CircuitPython under the board module. Names that start with # are prefixed with D and other names are as is. So #0 / RX above is available as board.D0 and board.RX for example.

There's a 'camera' input peripheral you can use with some camera chips to capture video with 8-bit data width. We thought this was neat so we made sure all those pins were available. Here are the PCC pins (left) and the Feather M4 pins it's mapped to. Unlike other peripherals, you cannot mux these signals to other pins!

As part of the 'Express' series of boards, the Feather M4 Express is designed for use with CircuitPython. To make that easy, we have added two extra parts to this Feather M4: a mini NeoPixel (RGB LED) and a 2 MB QSPI (Quad SPI) Flash chip

The NeoPixel is connected to pin #8 in Arduino, so just use our NeoPixel library and set it up as a single-LED strand on pin 8. In CircuitPython, the NeoPixel is board.NEOPIXEL and the library for it is here and in the bundle. The NeoPixel is powered by the 3.3V power supply but that hasn't shown to make a big difference in brightness or color. The NeoPixel is also used by the bootloader to let you know if the device has enumerated correctly (green) or USB failure (red). In CircuitPython, the LED is used to indicate the runtime status.
The QSPI Flash is connected to 6 pins that are not brought out on the GPIO pads. This way you don't have to worry about the SPI flash colliding with other devices on the main SPI connection.
QSPI is neat because it allows you to have 4 data in/out lines instead of just SPI's single line in and single line out. This means that QSPI is at least 4 times faster. But in reality is at least 10x faster because you can clock the QSPI peripheral much faster than a plain SPI peripheral
However, the QSPI port is not also on an SERCOM. So, you have to either use the QSPI peripheral or bitbang SPI if you want to talk to the chip. We have an Arduino library here which provides QSPI interfacing for Arduino. In CircuitPython, the QSPI flash is used natively by the interpretter and is read-only to user code, instead the Flash just shows up as the writeable disk drive!

On the Feather M4, at least for now, AREF is tied to 3.3V due to a silicon v0 bug that does not allow the DACs to work unless AREF is connected to 3.3V. You cut the bottom jumper if you need a different AREF voltage but note that this may change DAC range!

If you'd like to do more advanced development, trace-debugging, or not use the bootloader, we have the SWD interface exposed. You'll have to solder to the two SWD/SWCLK pads on the bottom: