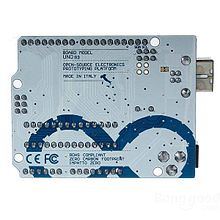 Arduino-compatible R3 UNO board made in China with no Arduino logo, but with identical markings, including "Made in Italy" text
Arduino is open-source hardware. The hardware reference designs are distributed under a Creative Commons Attribution Share-Alike 2.5 license and are available on the Arduino website. Layout and production files for some versions of the hardware are also available.
Although the hardware and software designs are freely available under copyleft licenses, the developers have requested the name Arduinoto be exclusive to the official product and not be used for derived works without permission. The official policy document on use of the Arduino name emphasizes that the project is open to incorporating work by others into the official product.[21] Several Arduino-compatible products commercially released have avoided the project name by using various names ending in -duino.[22] 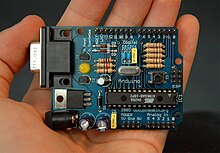 An early Arduino board[23] with an RS-232 serial interface (upper left) and an Atmel ATmega8 microcontroller chip (black, lower right); the 14 digital I/O pins are at the top, the 6 analog input pins at the lower right, and the power connector at the lower left.
Most Arduino boards consist of an Atmel 8-bit AVR microcontroller (ATmega8,[24] ATmega168, ATmega328, ATmega1280, ATmega2560) with varying amounts of flash memory, pins, and features.[25] The 32-bit Arduino Due, based on the Atmel SAM3X8E was introduced in 2012.[26] The boards use single or double-row pins or female headers that facilitate connections for programming and incorporation into other circuits. These may connect with add-on modules termed shields. Multiple and possibly stacked shields may be individually addressable via an I²C serial bus. Most boards include a 5 V linear regulator and a 16 MHz crystal oscillator or ceramic resonator. Some designs, such as the LilyPad, run at 8 MHz and dispense with the onboard voltage regulator due to specific form-factor restrictions.
Arduino microcontrollers are pre-programmed with a boot loader that simplifies uploading of programs to the on-chip flash memory. The default bootloader of the Arduino UNO is the optiboot bootloader.[27] Boards are loaded with program code via a serial connection to another computer. Some serial Arduino boards contain a level shifter circuit to convert between RS-232 logic levels and transistor–transistor logic(TTL) level signals. Current Arduino boards are programmed via Universal Serial Bus (USB), implemented using USB-to-serial adapter chips such as the FTDI FT232. Some boards, such as later-model Uno boards, substitute the FTDI chip with a separate AVR chip containing USB-to-serial firmware, which is reprogrammable via its own ICSP header. Other variants, such as the Arduino Mini and the unofficial Boarduino, use a detachable USB-to-serial adapter board or cable, Bluetooth or other methods. When used with traditional microcontroller tools, instead of the Arduino IDE, standard AVR in-system programming (ISP) programming is used. 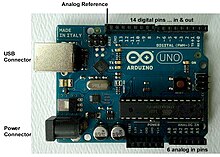 An official Arduino Uno R2 with descriptions of the I/O locations
The Arduino board exposes most of the microcontroller's I/O pins for use by other circuits. The Diecimila,[a] Duemilanove,[b] and current Uno[c] provide 14 digital I/O pins, six of which can produce pulse-width modulated signals, and six analog inputs, which can also be used as six digital I/O pins. These pins are on the top of the board, via female 0.1-inch (2.54 mm) headers. Several plug-in application shields are also commercially available. The Arduino Nano, and Arduino-compatible Bare Bones Board[28] and Boarduino[29] boards may provide male header pins on the underside of the board that can plug into solderless breadboards.
Many Arduino-compatible and Arduino-derived boards exist. Some are functionally equivalent to an Arduino and can be used interchangeably. Many enhance the basic Arduino by adding output drivers, often for use in school-level education, to simplify making buggies and small robots. Others are electrically equivalent but change the form factor, sometimes retaining compatibility with shields, sometimes not. Some variants use different processors, of varying compatibility.

Further information: List of Arduino boards and compatible systems
The original Arduino hardware was produced by the Italian company Smart Projects.[30] Some Arduino-branded boards have been designed by the American companies SparkFun Electronics and Adafruit Industries.[31] As of 2016, 17 versions of the Arduino hardware have been commercially produced.

Arduino and Arduino-compatible boards use printed circuit expansion boards called shields, which plug into the normally supplied Arduino pin headers.[48] Shields can provide motor controls for 3D printing and other applications, Global Positioning System (GPS), Ethernet, liquid crystal display (LCD), or breadboarding (prototyping). Several shields can also be made do it yourself (DIY).[49][50][51] 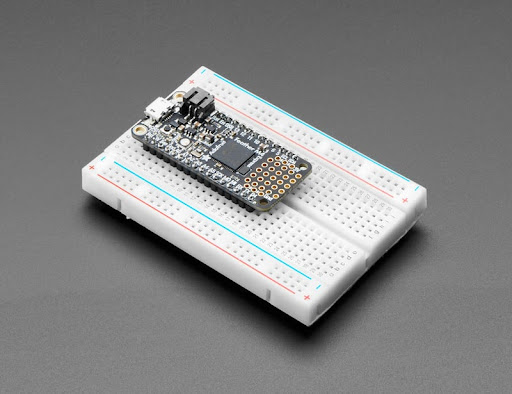